Some neighbors had a garage sale this morning and unfortunately Marcus stopped by. He saw something that caught his eye. He even told the owner, "I don't need this, but if you take $100 off I'll buy it." SOLD!

What?? Wasn't I just told yesterday not to buy any more pumpkins. That there was not any more money in the pumpkin budget? Apparently there is money in the scooter budget though. I am told it will save us tons of money in gas.

This is Marcus's new scooter. He's not a small man, so you can't help but laugh when you see him on it. One of his friends commented, "You've got to be pretty secure in your manhood to ride that thing." Another said, " a scooter is like an ugly girlfriend, they're great until someone sees you with one." 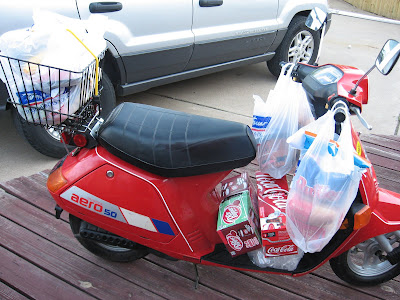 This is after he came home from the grocery store and loaded up.

He says he wants to paint it like the General Lee. I can promise that is not going to happen.