I Heart the Red Raiders! 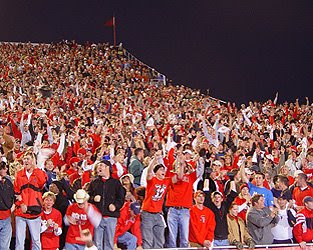 The Texas Tech game was a nail biter today. They sure made it exciting. Tech beat Nebraska 37 to 31 in overtime. Marcus and I went to run some errands after the game, so I changed into my Tech t-shirt. I was a proud alum. 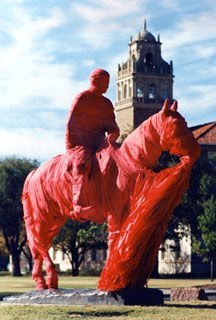 This is the Will Rogers statue on campus. Here's some info on that...
One of the most well known landmarks on campus is the statue of Will Rogers and his horse Soapsuds. This memorial was dedicated on February 16, 1950 by longtime friend of Rogers, Amon G. Carter. Carter believed Texas Tech was the perfect setting for the statue and that it would fit into the traditions and scenery of West Texas.
The statue stands at 9'11" tall and weighs 3,200 pounds; its estimated cost was $25,000. On the base of the statue, the inscription reads "Lovable Old Will Rogers on his favorite horse, 'Soapsuds,' riding into the Western sunset."
Today Texas Tech tradition and legends surrounds the statue. According to one legend, the plan to face Will Rogers so that he could be riding off into the sunset did not work out as it would cause Soapsuds' rear to be facing downtown. To solve this problem, the horse and Will was turned 23 degrees to the east so the horse's posterior was facing in the direction of Texas A&M, one of the school's rivals.
Before every home football game the Saddle Tramps wrap Old Will with red crepe paper. Will Rogers and Soapsuds have also been wrapped up in black crepe paper to mourn national tragedies.