We really celebrate half birthdays at our house. Thanks to my grandma. My sister's birthday is in August and mine is in February. So when either of us would have a birthday she would still give a gift to both of us and say it was for our half birthday. I think its a brilliant idea. My parents never bought into it.
So when Marcus and I were dating I told him about half birthdays. Sure enough when August 20th came around, I got a gift! We only had been dating about 5 weeks at the time, so he was still trying to woo me. Little did he know that he would have to keep up the half birthday tradition for the rest of our lives.
Today I made Marcus a buttermilk pie, from scratch! It's his favorite. I have never made one, but I got a recipe from Ruth Ann at Warm Pie Happy Home. She showed a picture of her final pie and says it looks like sunshine. Mine kind of looks like the moon. And her crust is perfect, mine is ugly. We haven't tried it yet, because it's still cooling. I thought I would write this post while I was still optimistic about how it's going to taste. It's the thought that counts right? 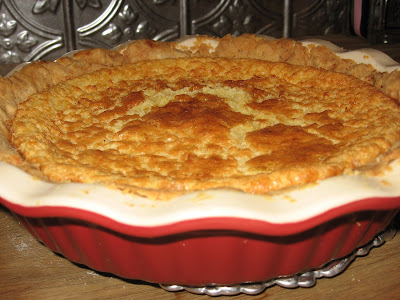