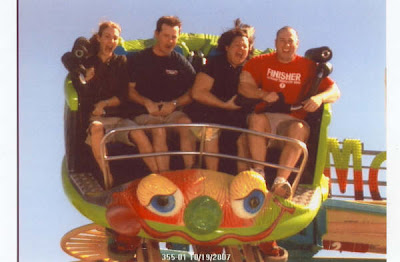 Today I am participating in a blog hop. You are supposed to post your favorite picture.

This is one of my all time favorites. It makes me laugh out loud every time I see it. It was taken almost two years ago at the Texas State Fair. This ride is called the Crazy Mouse. It looks like a kiddie ride, but looks are deceiving. It scared me to death. (as you can tell by my face and my grip on Marcus) Our friends Courtney and Stephen are on the left and Marcus and I are on the right.

The really funny thing is that Stephen and I rode it together the year before. Our spouses didn't want to go on it. I was brave until we got to the top of the hill and then I just had to hold on to him and apologize to his wife later. We convinced Courtney and Marcus to go on it this time. And we still talk and laugh about it two years later. Marcus now calls Courtney "The Nutcracker" because of the impressive magnitude at which she can open her mouth. We paid $6 for this picture and it was the best $6 we have ever spent.

What a great photo! Just hopping by.

That is too funny!

LOL That is too funny! Looks like you had fun!

OH WOW! That is a great photo! Too funny!

Hopping by from Buffalo, NY...

Hopping by to check out your blog. I love the photo...that is priceless! I really like your blog...you have found a new follower =)

I have been following your blog for awhile now. I love the way you have decorated your home, it is amazing! Recently I noticed that I think you live in Grpaevine, TX. If so I'm your neighbor, what a small world.

That is funny! I posted a similar one about a week ago. Son of a friend of mine. Five kids on the ride, four having the time of their lives & the son with the most indescribable grimace on his face you've ever seen! It is precious.

So glad you enjoy the pic, even if the ride was questionable! :)

Hey, I came across your blog through this blog hop, what a funny photo!

I entered my son in a Crazy Haired Baby photo shoot contest. If you have a moment (less than a minute) would you mind voting for him? He is in the top 9.. and it's just down to who gets the most votes. Contest closes July 11th at midnight PST.
If you could click on this link: http://lucylimestudios.com/2009/07/crazy-haired-kids-casting-call-shannon-stevenson-lucy-lime/

Select baby #6
Click Vote
Thanks for your help! Have a blessed day!

I couldn't believe this because we have the same picture and it's probably my all-time favorite:

(found your blog from Kelly's Korner)