Kelly's Korner is hosting SHOW US YOUR LIFE: Your Wedding Party.

Again I have to warn you about the terrible picture quality. I took pictures of my pictures. I would have no idea how to scan something if you paid me.
I got married on October 23, 1999. The weather was perfect that day. And I loved all my fall colored flowers. 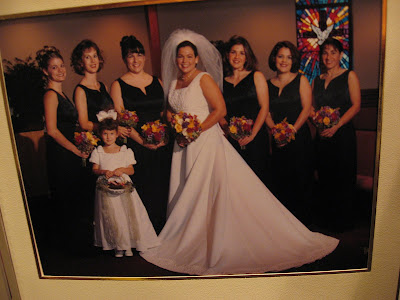 First is my friend Kara. We have been friends since we were 7! Then Marcus's sister, Pam, my sister, Kelly, my cousin Stacey, my friend Amanda, who I have know since Jr. High and we were college roommates too, and my other cousin Kristen, who I just went to visit in Colorado.

Kara and I used the same photographer so we had similar pictures. 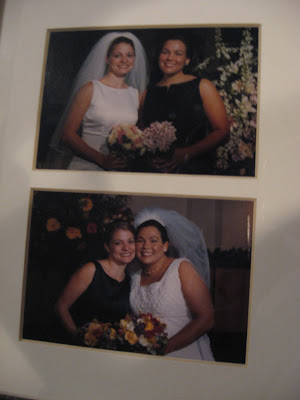 The first picture she is the bride,and then I am the bride.

Marcus's groomsmen were all high school friends and his brother. 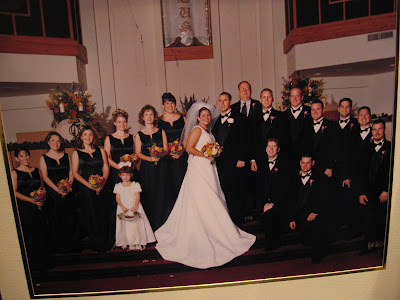 Our sister-in-law, Lisa's dad married us. He was Marcus's pastor for years and had known him his whole life. And Lisa sang at our wedding. "I Will Be Here" by Stephen Curtis Chapman.

Here are the guys, so excited about the wedding! 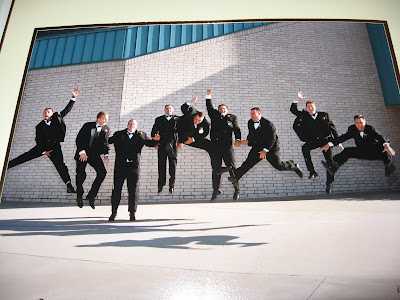 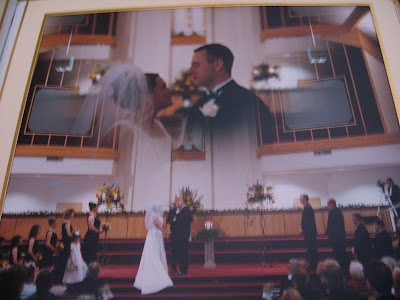 My cousin Stacey has a crazy link to our wedding. She was living in San Francisco at the time, but had friends in the Dallas area since she went to SMU. So she went out with a friend that weekend and ran into a guy she had met in the past. His name was Marcus too. It just so happened that he lived in San Francisco also, but was also just in town for the weekend. So they ended up going out when they got back to San Fran and ended up married almost exactly two years later. Then two years after that, on October 23rd, they had their first baby. 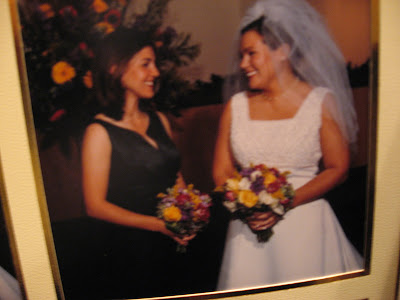 But, very sadly, Stacey's Marcus died last summer unexpectedly. She was pregnant with their third baby at the time. It makes me so sad, but I am glad my wedding had a part in Stacey meeting her husband. Which led to 3 beautiful kids.
Marcus and I will be celebrating 10 years of wedded bliss in just a few months. We should have gotten married when we met in Jr. High. Think of all that time we wasted and all those frogs I kissed for no reason!

thanks for sharing!! i love your blog... I didn't really have a wedding with attendants but I love weddings!!

I'm getting married October 24th - to a boy I met my freshman year of high school!

Oh Dina.... what a beautiful pictures.

10 years is a long time... But I am always saying. It is a wonderful long time.

I just read your comment and had to tell you that I always loved seeing Scott hold babies when we were trying.....it would make my heart swell to picture him one day holding our baby. (and it's sooooo much better than I dreamed when I see him with Harper now). I pray that for you soon!!! :-)
And Scott cuts his own hair because he says I spend so much on mine he has to do his own for free. ha ha ha ha!

Hi, I was cruising your blog (something I do late at night when I can't sleep..catch up on blog reading!) and wanted to give you a shout from another DFW girl!

Your blog is so fun! I noticed we have a lot in common: I love whimsical decor, I do LOTS of c-mas trees (I think I'm up to 13 now), married for a long time with no kiddos yet...etc. My neighbors behind me used to live a few streets over and bought their current house for the yard, too! ha! I love garage sales, too, and try to go every weekend. Too bad you aren't on the Dallas side of town...I bet we'd have a lot of fun!

Nice to meet you!