Too Bad It's Almost 100 Degrees

I hope you all had a Happy Labor Day.

Fall doesn't officially begin for 2 more weeks, but I thought it was time to pull a few things out. Hopefully in two weeks the temperature will drop about 30 degrees, because it is too stinkin' hot!
Do you see how Marcus labeled my fall box? 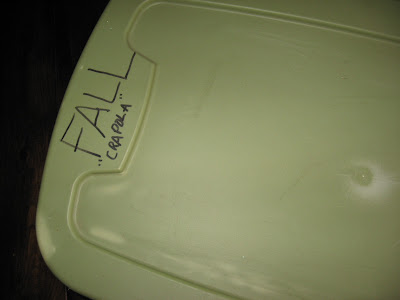 I know he didn't mean it. I am sure he is just as thrilled about decorating as I am. 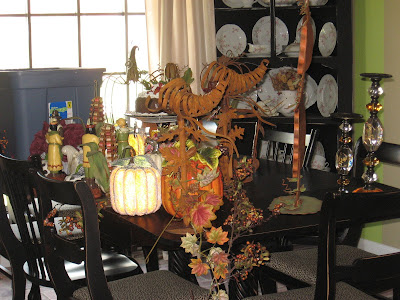 And to get me in the mood to decorate, since it doesn't feel like fall, I needed it to smell like fall. 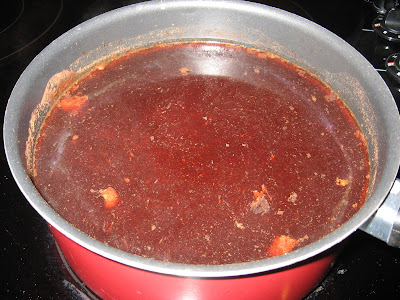 I just put water on the stove and add cinnamon and cloves. You can also add apples or oranges to it too. It smells heavenly and it's cheaper than a candle. Although I have plenty of those burning too.

And this has nothing to do with fall and I'm sure you don't care, but I cleaned out my spice cabinet.

When I was getting the cinnamon out, I realized I had FOUR bottles. FOUR! I just didn't know I had four, because it was a disaster in there! 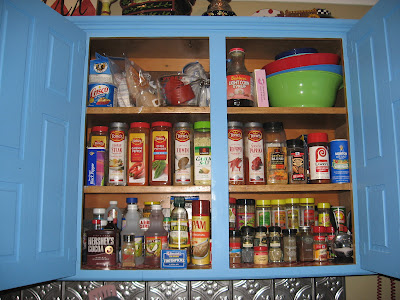 I just wanted to take picture for evidence that it was actually organized once, because if I know me this ain't gonna last.

I have to tell you that I have been bugging my husband for the last week to get my fall decorations out and he hasn't budged. I will leave your blog pulled up for him to see as living proof that someone else is as nuts as I am!!

I put out all of my fall decorations today too! My husband thought I was nuts!

I look forward to seeing your post with all your decor around your house.

I am thinking about getting my stuff out this week end! I just can't wait. I also can't wait to see all your decor in your house! I am sure it will be cute as a button:)

I managed to talk my husband into getting my "fall crappola" out of storage yesterday as well...now I've got to get busy decorating! Can't wait to see pics of your casa! :)

Oh I so remember when I was little that my mom would put a pot of water on the stove with orange slices and cinnamon sticks. Smelled divine!! Thanks for bringing back that memory. :)

So, now I need to go clean out my spice cabinet! Thanks Dina! :)

LOL! I have several bins of seasonal decorations that are labeled "crapola".... and it wasn't me!:-)

The HomeGoods down here in Mansfield has some amazing fall decorations. And for super cheap. We just got a china hutch and I ran over to HomeGoods and bought some gorgeous fall plates and platters I've had my eye on. And just for the record, they are already displayed in the hutch THREE weeks before fall starts!

I like Marcus' labeling...but don't feel bad...all men feel that way :) I thought of you yesterday...I broke down and bought some really cute pink dishes...I thought since I have a little girl...I could serve some of her stuff on them :) My house is going to be sad this year...I have no fall decorations and they don't have any out for sale here either :( I'll just live vicariously through you!

I started a Goodwill Goodies Party. Come by and enjoy every Wednesday!!

I can't wait to see the decoration up. Fall is my favorite season. Check out this cute pumpkin idea. You have to scrool down the post to where it says Passionate About Pumpkins.

I am going to make some for my mantle.