Untitled, Because I Can't Think of One...

11 years ago yesterday Marcus and I were at a time share in East Texas about to leave on our way home. We were watching the news and saw the first tower burning and then saw the second tower get hit. It was surreal. It didn't even register that it could be terrorism. I thought maybe some air traffic controller guy got confused? 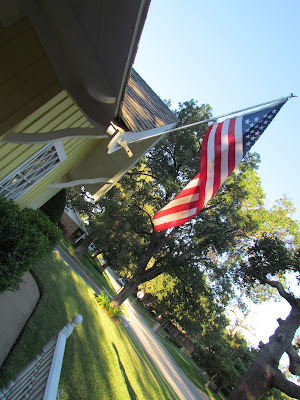 Then as we were driving home, no music was playing on the radio. It was just people talking and news feed. We heard about the other planes crashing too. I kind of felt like we should stay in small town Texas, because we might be safer there. Dallas is a big city and I wondered if something was planned for here too? It was scary.

I wish I had some great poetic words to say about it, but it was just senseless and sad. And of course, I think a lot about the fire fighters, and what awesome super heroes they were that day and the days after.

I just had to acknowledge the day. 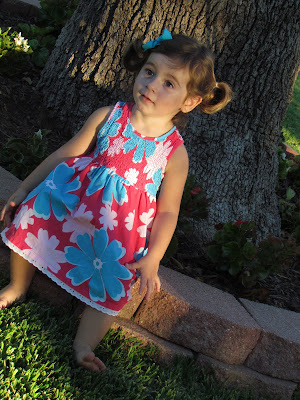 Katie wore a version of red, white and blue yesterday. 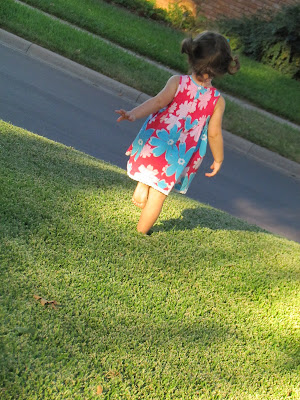 I love that kid!

Yesterday while she was at school I organized her gigantic mountain of clothes that no longer fit. And put them out to sell.
I traveled down memory lane with almost every piece of clothing! I held up some new born things for Marcus to see. He kept saying, "There is no way she fit into that." 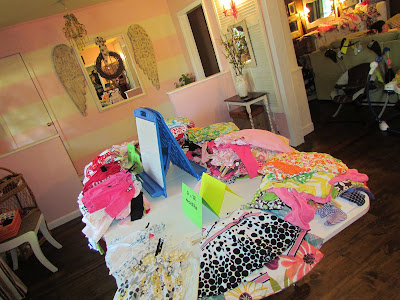 There is no way I could have gotten it all done with out my mom's help. She ironed almost everything. It was all smushed in Space bags, so it got pretty wrinkled. 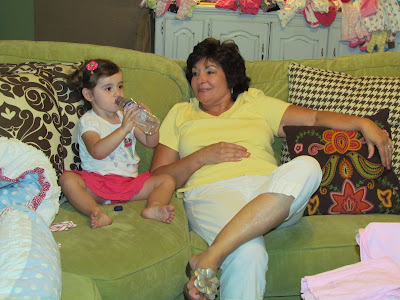 It's been fun having friends come by and "shop". Unfortunately, Katie was a toot when people came over!

When she is with family, she is always kissing and hugging us, and says sweet and cute things. (most of the time) THEN, when we are around others she tries her hardest to humble and embarrass us! And make it look like we haven't ever attempted discipline!
What's the deal? 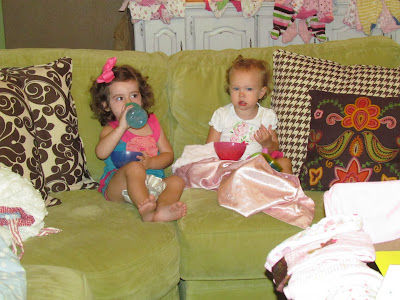 Here she is with one of my friend's daughters. They are eating goldfish with their blankies. Goldfish can usually keep the peace for a little bit.

THANKFULLY, I just started going to a parenting class tonight with my sister. It's called Love and Logic and Katie's pediatrician is teaching it at her church.

I hope it can make me at least LOOK like I know what the heck I'm doing!

Haha Dina! As a former preschool teacher, I can tell you that Katie's behavior is totally normal!

You're doin a great job, mama! And hey, I have heard that Love & Logic is a great class! Keep us updated on what you think about it! Very cool that her pediatrician is teaching it.

I believe our kids would get along great except your's would be all clean and lady-like and my son would just get her dirty!! I couldn't get rid of my son's things yet. I keep buying more totes to put his out grown things in and hide from the fact that he IS NOT a baby anymore.

As a parent and a teacher, I can't say enough good things about Love & Logic. I use it with my kids at home and my kids at school and it's changed my outlook on children completely. My hubby even claims that I try it on him sometimes ;) He'll say, "Did you just Love & Logic me???" LOL :)

Hi,
Came across your blog and was reading a post you made three years ago on bedroom redos. Just wondering if you could tell me what the paint brand and color was for your tan walls??