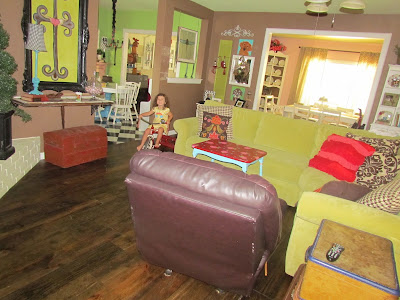 So I pushed the furniture in, and let Katie ride her tricycle inside. She did a million laps around the living room.
Attention Marcus: look how terrible your recliner looks from behind! (I don't love the way it looks from the front either, if I'm being honest) It's time to get rid of it! 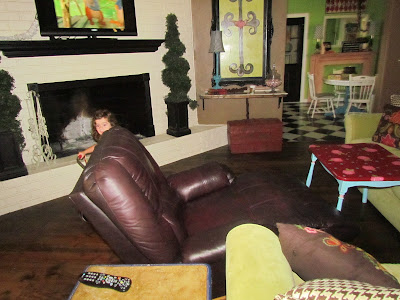 I'm all for anything that burns energy. I was sad to see how much dog hair was under my couch when I moved it though! 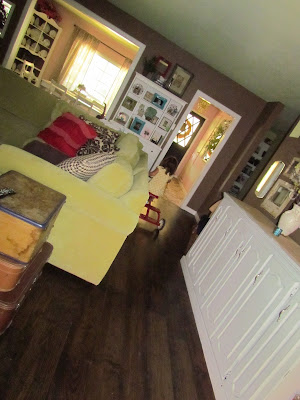 This all happened before breakfast. Katie had to refuel with some toast. Half with chocolate (nutella) and half with cinnamon and sugar. 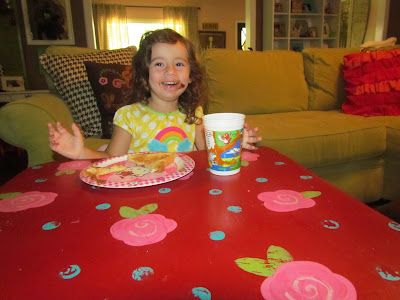 We might have to bring the trampoline in next!

Party at your house! You have the fun house this summer! I'm sick of this heat. If it weren't for having to get up at 6:30 (did you know there's one of those in the MORNING?) I'd totally be ready for late October.

You're such a fun mom! I may just have to clean up my kids' scooters and let them ride inside because you're right this heat is awful. It's bad when it's too hot to SWIM! We have to wait until after dinner :-( I bet Katie had a blast riding in the house!!

Just wondering......has the trampoline been moved in yet? Haha!!! There is lightning over your direction, sure hope someone is fortunate to get some rain!

Oh no....I have the news recorded and just saw that there was some bad wind and damage in your area and lots with out electricity. Hope everyone ok.

After talking to you this morning about my blog, I had to find yours ;)! Super fun! Look forward to keeping up with you guys!