The Cat's Out of The Bag

Katie announced in school, during music, that her mommy has a baby in her belly!
She's right, I do!

This is when she announced it to our family.
It was Marcus's birthday, September 1st.
We were about to sing and she said, "I'm gonna be a big sister!" 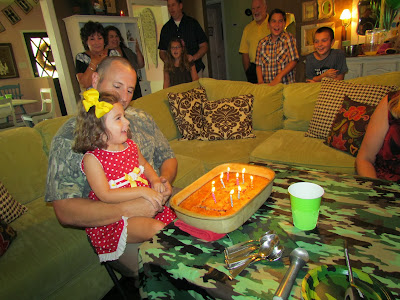 They weren't sure if they should take her seriously or not.
One time she announced the same thing in Sam's and it wasn't true at the time! Maybe she's just a prophet?!

Anyway, we are thrilled, and shocked, and optimistic!
I am 10 weeks along. And due to 2 miscarriages in the past, I have been to the doctor a lot!
We have seen a strong heartbeat and our next sonogram is on Tuesday.

I am BEYOND exhausted!
That is why I have barely been blogging. Sometimes sitting at the computer at typing sounds equivalent to climbing a mountain! I have been taking progesterone and I think that's the cause of the extra tiredness...that and I am 38 1/2 and pregnant! Holy Cow!

It's funny, before we were married, Marcus and I agreed that we wanted to be "young" parents! I even said "I will not have a baby after 31! That's my cut off!"
God had different plans, and I think they are better!

We would appreciate any prayers for a healthy baby!

I just have to say how happy I am for you! Long time reader here... haha! Congrats to your sweet family!

Congrats!!!! How exciting! We'll pray for a healthy pregnancy and a happy healthy baby!

I am so excited for you and praying for you. What an awesome Big Sister she will make! very sweet!!

Congratulations! Will pray for you and baby.

such a sweet way to share the news with your family. Congratulations!

Waaaaah!!!!!!! Congrats and praying for a healthy, happy and full term baby! And lots of naps for mama! 😉

Yay!! So excited for you! I really hope it all goes well!

Congratulations! I will be praying for a healthy pregnancy and baby. I know what you are going through! So happy to hear this news.

Soooo excited for you!!! What a blessing from The Lord!!!

what a blessing, rejoicing with you! so happy for your sweet little family! i will be lifting you and the baby up in prayer! PTL!

Congratulations!!! So excited for all!! Will keep you in prayer. Katie is priceless :)!!! Not planned on your end, but what an awesome way of telling the family. Can't wipe the big grin off my face for y'all :D

Hi There, I haven't read your blog in forever and this afternoon I was catching up on all your posts. I kept thinking, " I can't believe Dina isn't pregnat again". Well, low and behold you are!! That is so wonderful!! Praying for you and your family!! Johnnie

I am very excited for you. I will be praying that you have a healthy and happy pregnancy. How wonderful for Katie to have a sibling. I was so happy to hear your news and it made my day!!!

I am very excited for you. I will be praying that you have a healthy and happy pregnancy. How wonderful for Katie to have a sibling. I was so happy to hear your news and it made my day!!!

Congrats!! I am SO excited for you!! Prayers coming your way!

Aww Dina congratulations! I am so excited for your family!

I'm so happy for you! And I love Katie's enthusiasm!

Yay!!! So happy for you and your sweet family!

Yay! So happy for you and your family! Lots of prayers and good thoughts being sent. My best survival tips for #2 are breath right strips (for sleep!) and help when you can get it with #1. It goes SO fast since you're not as focused. Enjoy!!

Congratulations!!! Prayers for a healthy baby!

Oh Dina I am OVERJOYED for you guys. Genuinely so happy.

I always read but I suck at commenting.

I always hope to hear this news from you. When I saw the post title I thought 'hey they must have got a cat', I love cats, but a baby is much better news!!

Praying for a healthy pregnancy and baby.

Oh Happy Day! Congratulations! Just to let you know, I was 38 1/2 when my youngest was born, and I'm a strong believer that it's your kids that keep you young! Blessings to you and your family. :)

It's funny how happy you can be for someone you don't even know! Congrats!!!

Dina, I love this post and have been waiting so long for it to happen for y'all my sweet friend. Katie is going to be a awesome big sister. We are truly ecstatic for y'all . Thanks for sharing with me the other day. We love your family.

Dina, I love this post and have been waiting so long for it to happen for y'all my sweet friend. Katie is going to be a awesome big sister. We are truly ecstatic for y'all . Thanks for sharing with me the other day. We love your family.

Congrats!!! I'm so happy for your family!!

I was thinking of you the other day when I was pulling out clothes for Juliana and came across an outfit that was Katie's. If you have a girl I've got a hefty supply to send your way.

Woo-hoo! YAY! Yahoo! and every other excited exclamation out there!!!

Congratulations!!!! And the being tired part I think just happens when you have a toddler and are pregnant. I remember feeling like I could not physically move-every part of my body was so heavy! Praying for you and the bambino!

I am beyond excited for you! Praying you have a healthy pregnancy.

So, so happy for you and praying for you and your family. I have a three year old, had a miscarriage, and now have a nine month old. I love your blog!!

So, so happy for you and praying for you and your family. I have a three year old, had a miscarriage, and now have a nine month old. I love your blog!!

Hi Dina! I have read your blog for some time now and love it! Congratulations on your pregnancy! I also suffered two heartbreaking miscarriages....but then went on to have 3 precious children. I also was on high doses of progesterone and I remember lots of doctors visits! I will be uplifting you up in prayer!! Stay positive!

Congrats!! Praying for you!

Get OUT! I'm so happy for you! I know what much you wanted to add to you family! Yayy. Prayers for you and your lil babe!

I don't even know you personally, but follow your blog. This made me tear up. So happy for your family!

Congratulations! God bless you and your family!

Congratulations! So exciting! We just went through a loss and I am 40... So I understand all your concerns. Will be praying for you!!! Many blessings.

aaahhh!!!! I am soooo excited for you all!! The former music teacher in me also LOVES that Katie spilled the beans in music class! So fun.

Makes my heart happy for you - Congratulations :)

Aren't you glad that God is in control and His plans are better than ours? God is Good All the Time! So very, very excited for you and Corby that we he will have another friend!

Congratulations to all of you and prayers and best wishes for a healthy babe!

People plan elaborate ways to announce tot heir family they are pregnant. But this just beat them all!
So cute!

OH! And the other day we were on Skype with my parents and EC ran into the frame and loudly said "BABY! In mommy's belly, BABY!" And pointed to it. Needless to say my mother screamed and jumped up and down, my dad was like, really? And all the while I was just laughing. I am SO not pregnant. I still think my parents don't believe me ;-)